By MuddyFeet on May 22, 2011 in activities with children, Animals, Education, Science

Wonder where we’ve been lately?  We’ve been overrun with insects!  Really, that isn’t as bad as it sounds – we are loving it!

Since the butterfly post a month ago, we have had butterfly eggs which we were able to hatch and raise; reaching almost 50 butterflies!  Those have been busy laying eggs of their own and now we have another batch of caterpillars coming up – as well as eggs out the ears!

One of the butterflies stops for a drink at our quickly assembled butterfly feeder. See the super long black tongue (proboscis)? Normally the butterfly keeps it rolled up in a spiral.

This female is hard at work finding places to put her eggs! Most of them are landing on the Mallow leaves inside the pot, but some are ending up on the side of the pot, the butterfly feeders we made, and nearby branches. They are tiny blue-green specks – about the size of a pinhead! 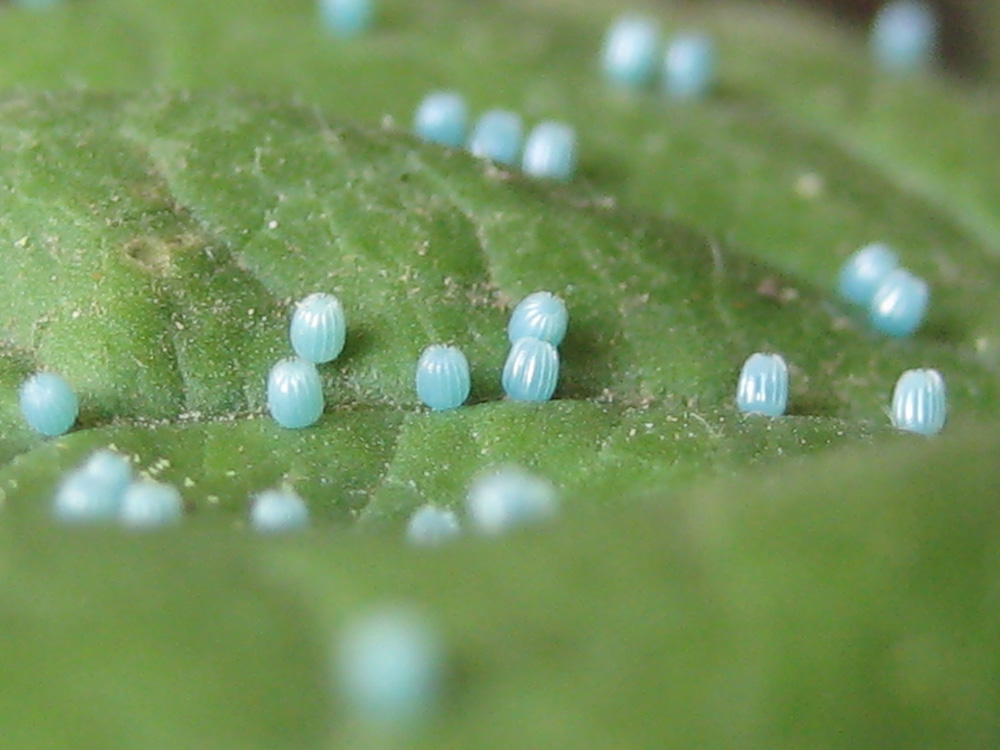 Here are the eggs up close.

In addition to the butterflies, we had ordered some mantis egg cases.  Perhaps you remember from the last post that I thought we had 4 to 6 weeks before they hatched.   In reality, they started hatching that same day.  I looked into the little shipping cup they came in, just to make sure nothing was going on and I was greeted my an army of little eyes and limbs.  I am thinking that our warmer temperatures might have played a part in the early arrival of these little guys.  After I set up the butterfly habitat, I found a container to temporarily house the mantises in.  Then I went out to our compost container (the city recycles old and broken refuse containers into compost bins – very cool!) with a large zip-loc bag in hand and I started waving it around like mad to catch fruit flies.  This must have been a sight to see.  The kids and spouse gave me some pretty strange looks.  I managed to capture a whole slew of the tiny bugs though!  I popped them in the freezer for a few seconds to calm them down and then dropped them into the mantis box.  The hungry little mantises grabbed them right out of the air once they began flying around again.  Watching a mantis stalk and kill its prey is really quite amazing!  After a week or two of observation, we ended up letting a majority of the little mantises go free in the yard.  We kept a handful to watch, but, since they can be cannibalistic, we are down to a single, happy, large mantis. 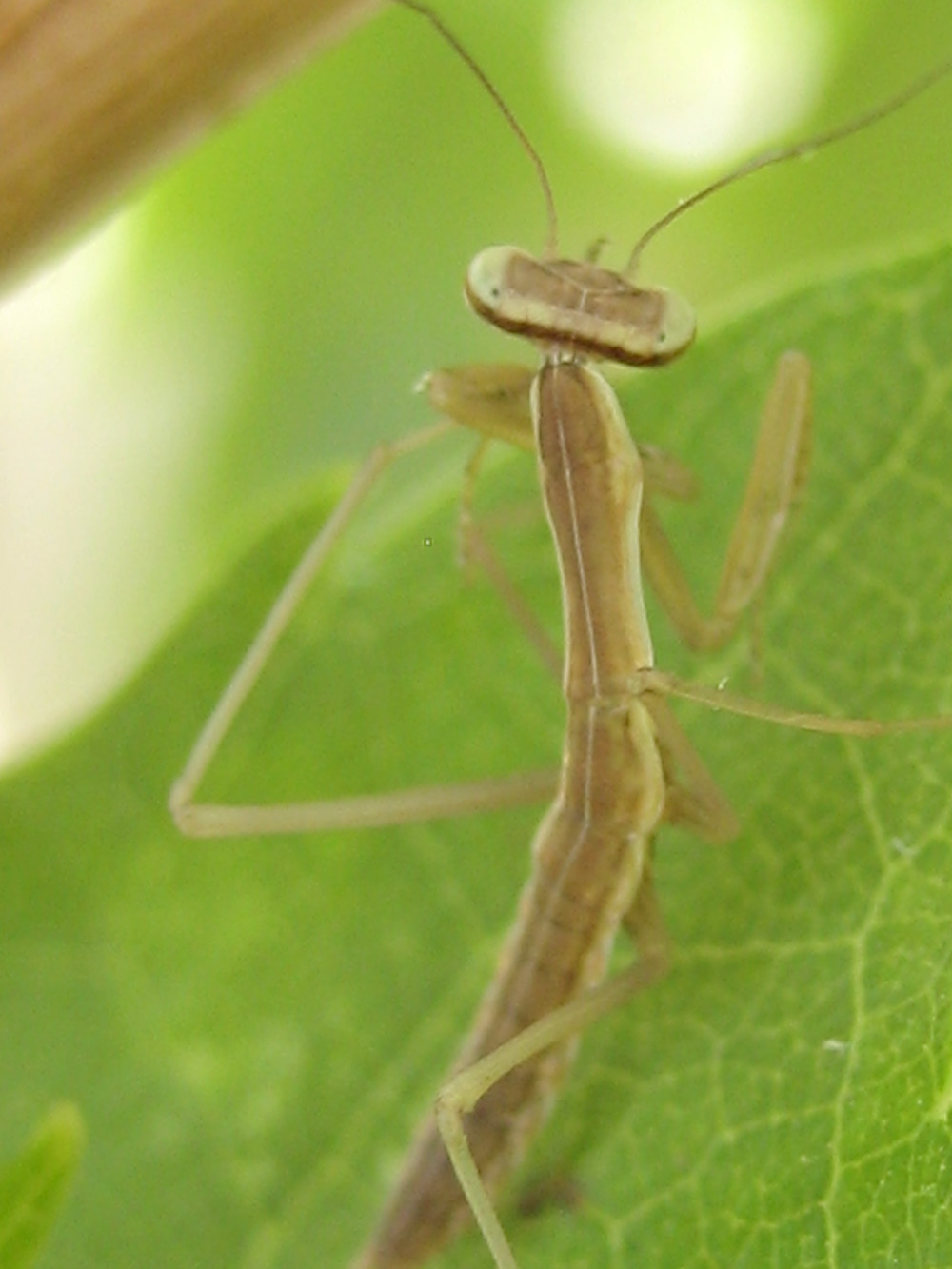 One of the Praying Mantises that was released – just hanging out on a leaf, trying not to get blown away by the gusty wind. 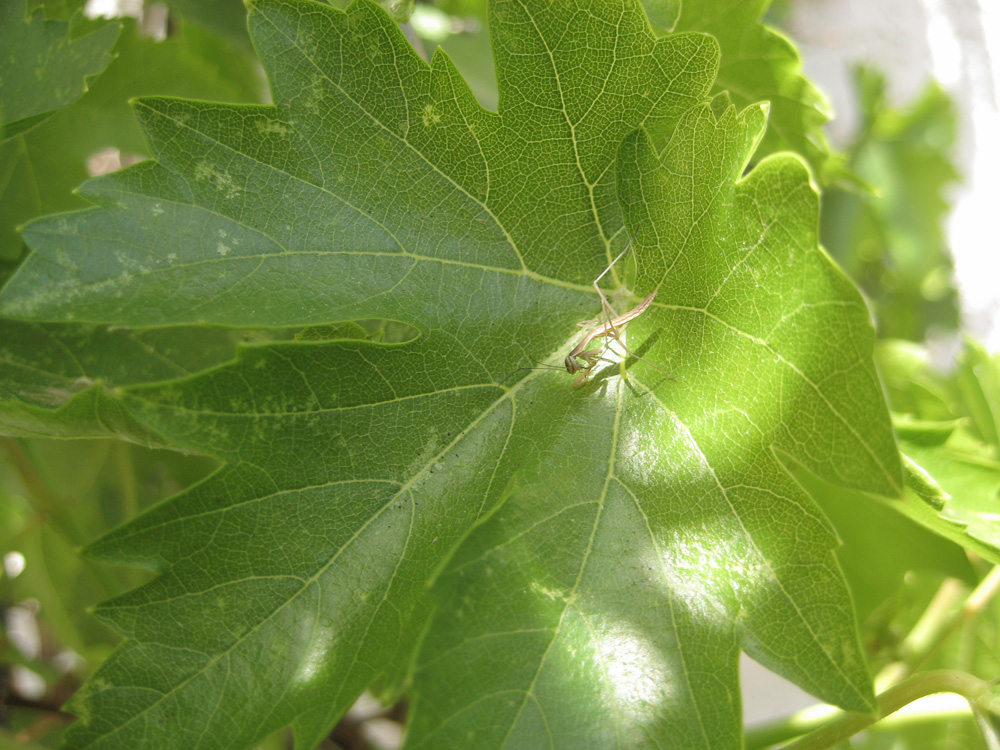 To give a sense of scale, this grape leaf is about 4 inches wide. The mantises were about half to three-quarters of an inch long when released. 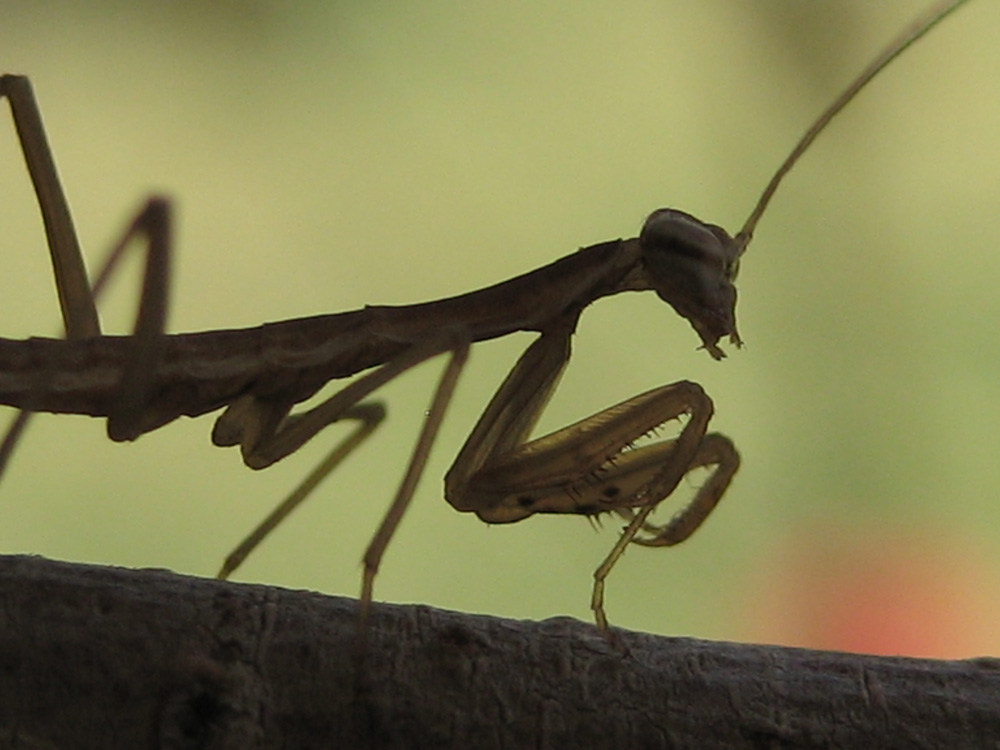 Surprisingly, these guys were very happy to stay put and pose for a few photos. If there had been less wind trying to blow them away, I would have had a lot more pictures!

In that last post, I also mentioned silkworms.  We ordered 100 medium sized worms, and a whole bunch of eggs.  Silkworms are not really worms, they are caterpillars.  They are really pretty neat to see and feel.  Quite soft and surprisingly warm feeling.   Several of the large “worms” ended up as frog and turtle food.   Silkworms are a  great way to add variety to the diets of reptiles and amphibians.  We fed the silkworms an artificial Mulberry diet and supplemented with leaves from the one Mulberry tree that we have access to.  With the first batch of half-grown silkworms that we ordered, feeding them was not too much of a chore.  When the eggs hatched and we had over a thousand to feed, it got a little crazy (and expensive)!   Not all of the tiny worms survived, about 500 made it to cocoon stage.  Now those are emerging from their cocoons and setting us up with an ever increasing supply of fresh eggs! 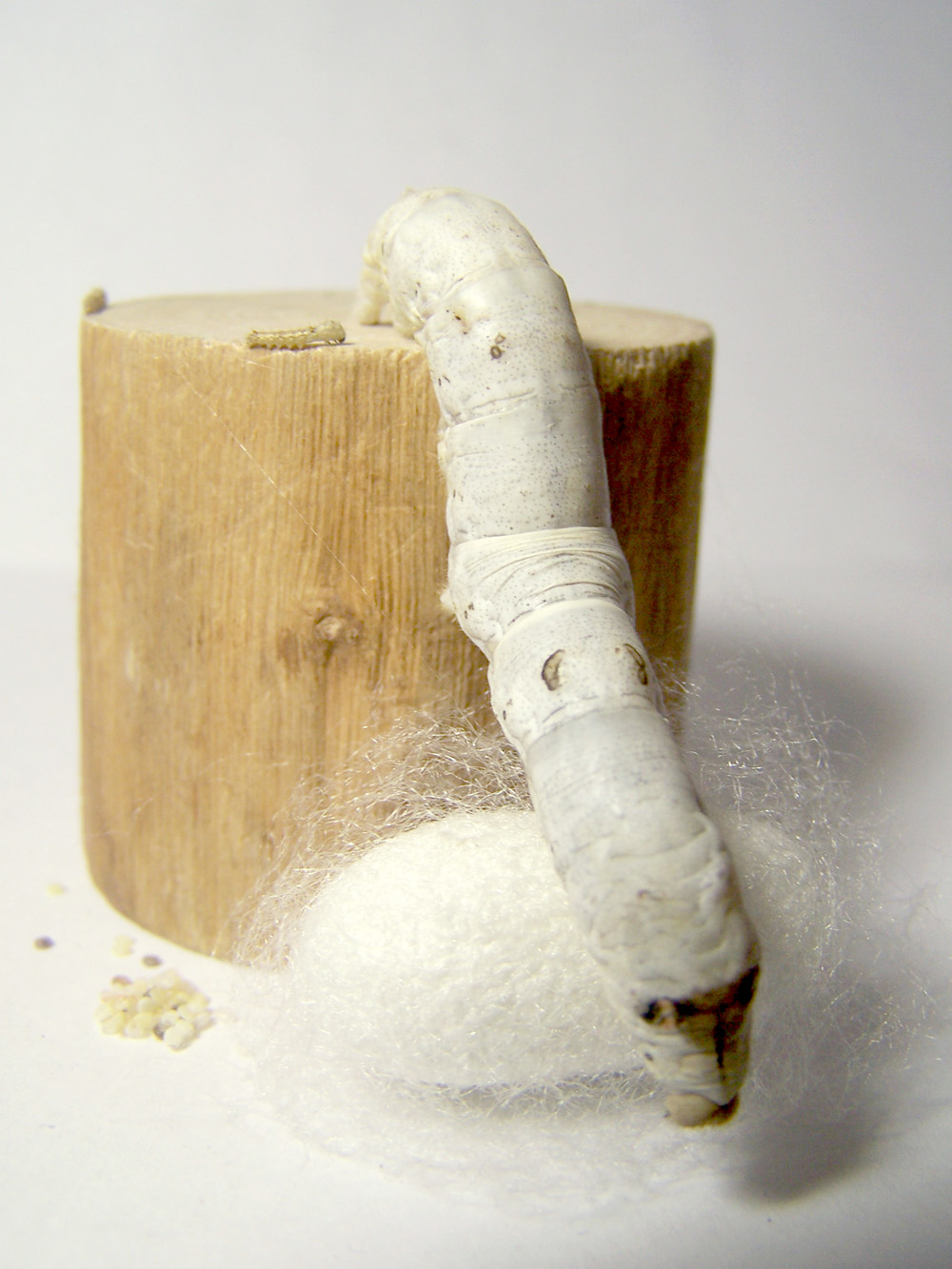 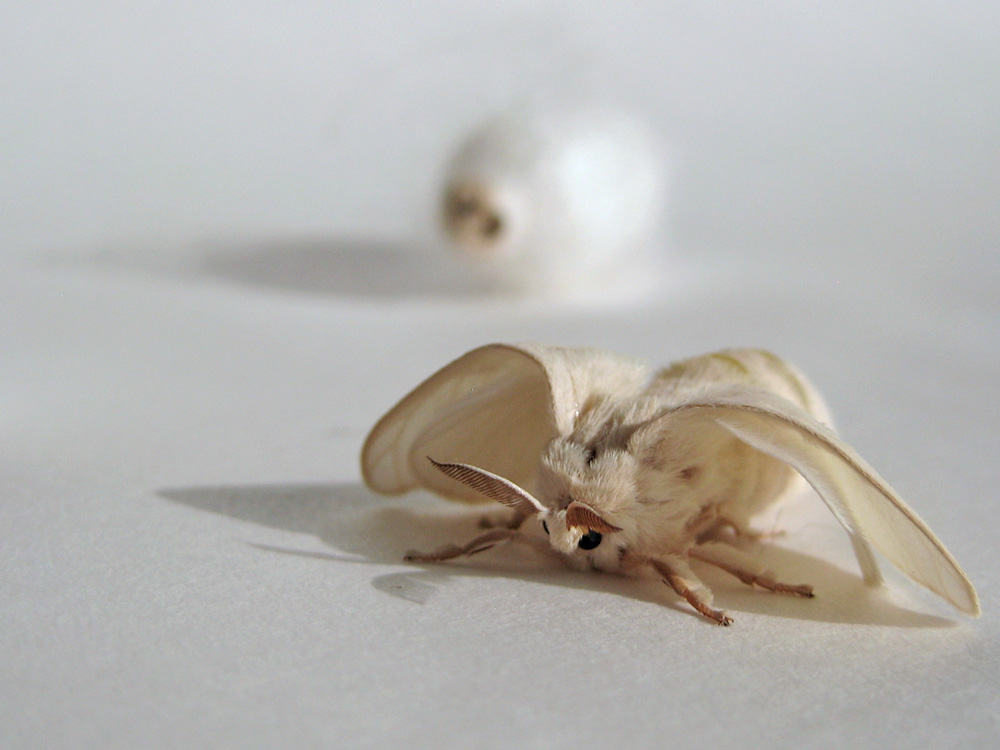 This silkworm moth has just emerged from its cocoon. Another is just beginning in the background. These moths have no mouth parts, so they excrete a substance that softens one end of the cocoon and push their way out. They do not eat their way out, nor do they take any food or water after they have emerged. 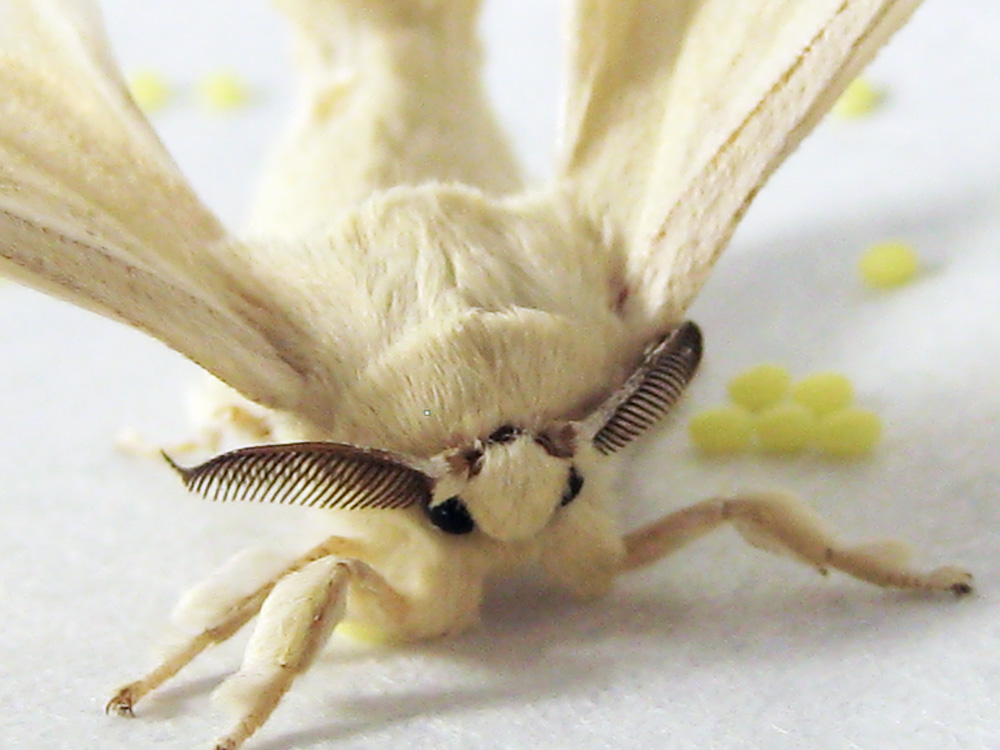 These moths waste no time getting down to business. They will mate right away and begin laying eggs shortly after. They do not move around much, and only live for a few days. The eggs start off a bright yellow color, but soon turn to dark grey. They look very much like tiny seeds! When they are about to hatch, the eggs will turn a purplish blue.

Do you have any odd or interesting “pets” in your home?

6 Responses to An Insect Update