Checking the mail isn’t something I usually get excited over.  In fact, I would usually prefer to avoid the inevitable bills that tend to find their way there.  Sometimes though, there are anticipated deliveries that have me watching for the mail truck and checking the box throughout the day.  One such delivery occurred Thursday – my order from Beanilla. 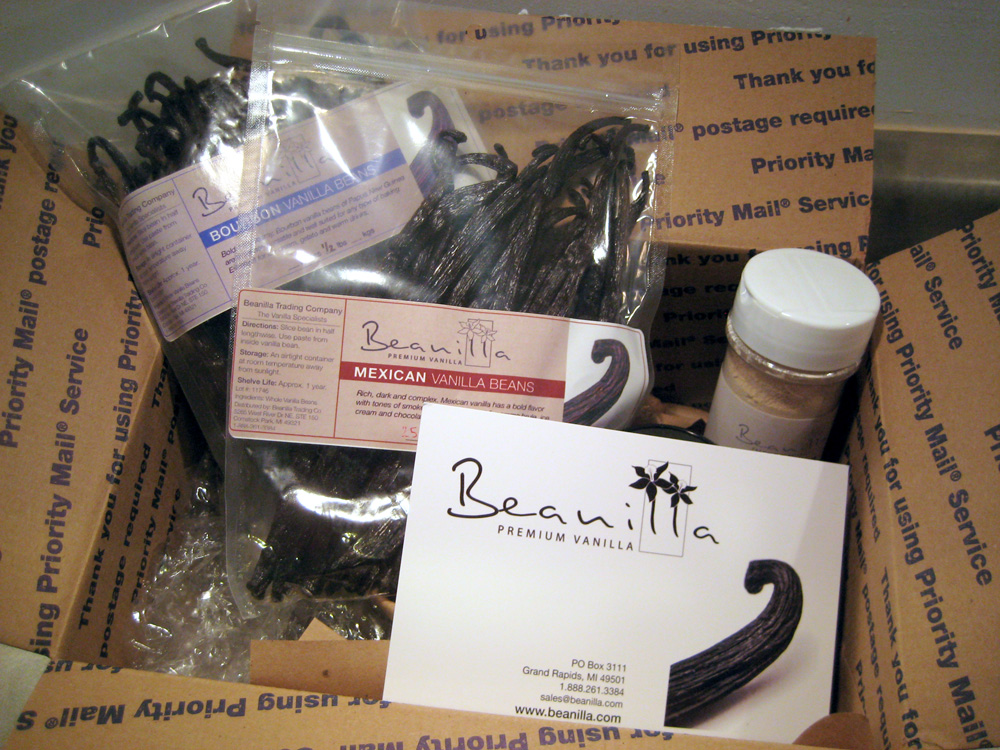 My shipment of vanilla beans from Beanilla, along with a few other goodies I wanted to test out.

I had been meaning to order vanilla beans for quite some time now, and finally managed to get it done.  A couple of years ago, I came across an article on making your own vanilla extract.  I wanted to give it a try, but didn’t really want to order vanilla beans in bulk – what if it didn’t go so well?!  So I picked up a few Vanilla beans at a little market that has since closed down, and proceeded to try my hand at making Vanilla Extract.  The results were pretty good.  My extract wasn’t as concentrated as the store-bought variety, but it still worked pretty well and was much cheaper!  Then I was gifted a big bottle of vanilla from my mother that she had picked up on a vacation.  The flavor was distinct and like no vanilla I had had before (really, I had just had the basic vanilla from the grocery store – it’s not like I had a lot of experience).  It was a real eye-opener to the possibilities that hand-crafting your own vanilla extract held.  Sadly, we used up that wonderful bottle rather quickly and have been missing the intensity and flavor ever since.  Which is why I finally decided to take the plunge and order some vanilla beans.   I opted to order from Beanilla due to the great reviews I have read about their company online, however I just discovered a local vanilla store that I think I may just have to go and check out too! 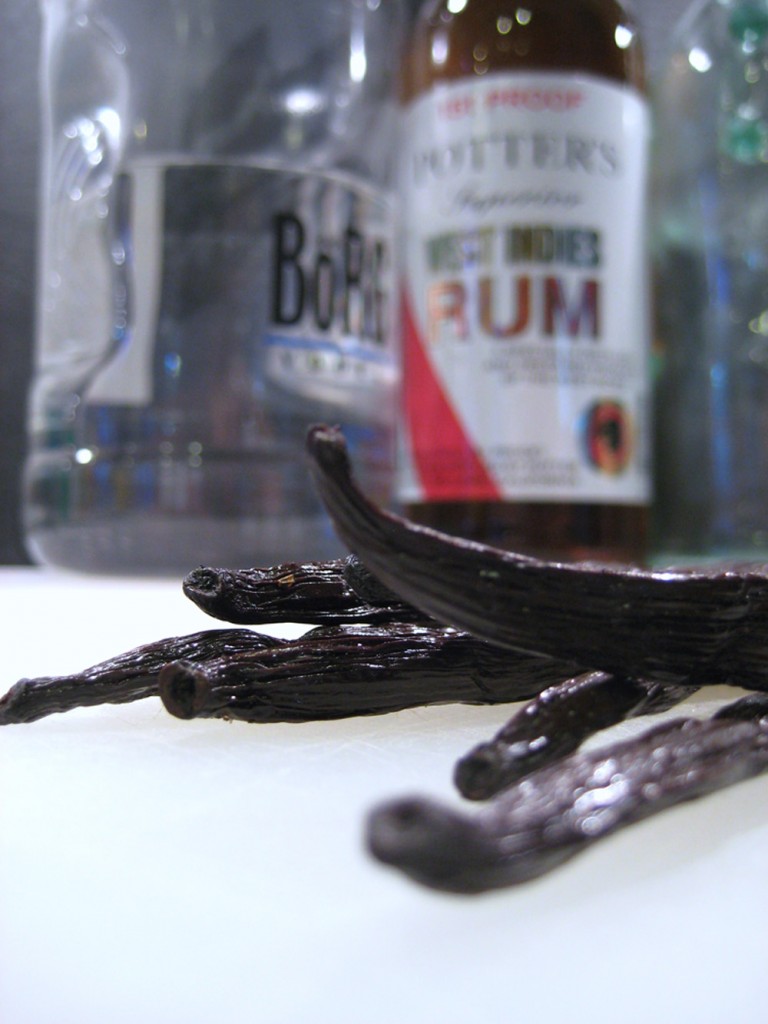 Soft, pliable vanilla beans waiting to be made into extract.

One of the first things that I noticed with the vanilla beans from Beanilla were that they were very soft and pliable, not like the beans I had purchased in a little package in the market, and not like the beans that rattle around in the glass jars at the grocery store and sell for extraordinary amounts.  The beans I had used before we quite difficult to cut and I was not able to scrape very many seeds out of the cut beans.  With the Beanilla beans, I was surprised at the ease of cutting (a sharp blade is still a good idea!) and the volume of seeds that I was able to extract from the pods.   Overall, the quality and price of the beans means that I will never purchase a vanilla bean from a grocery store again! 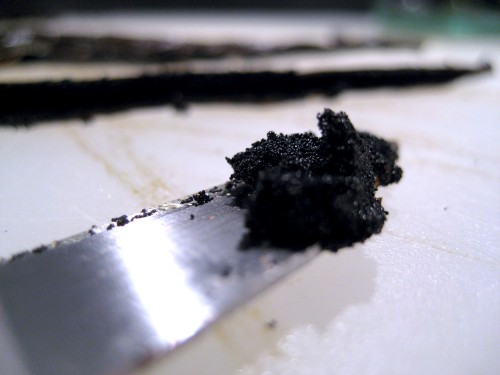 So, how do you make vanilla extract? 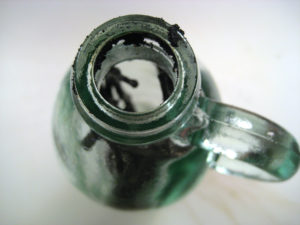 Trying to get all the little seeds to go into the jar is no easy feat!

1.  Have a clean, ideally clear, glass bottle or jar ready to go.

2.  Slice some vanilla beans right through the middle of the pod – just leave about an inch or so attached at one end.  The number of beans depends on the amount of alcohol you will be adding, and the desired strength.  Anywhere from 3 to 5 beans per cup of alcohol seems to be the recommended amount.  If desired, scrape out the vanilla bean seeds to use in other recipes, or to add to the extract (some people claim this intensifies the flavor a bit more, but many do not feel the need to do this).

3.  Put your beans into your bottle, and cover with your desired type of alcohol.  Most people use vodka.  Other possibilities include rum and whiskey.  I have opted to do one bottle with rum and one with vodka, and they each have a different flavor of bean too.

4.  Then cork or cap the bottle and give it a good shake.

5.  That’s it!  It will take several weeks for the extract to mature – the longer the better!  Periodically shake the bottle and store it in a cool dark place.  There is no need to strain – in fact, if you leave the beans in the bottle, you can continue to add more alcohol as needed to keep the bottle full.

6.  Enjoy!  Keep it for yourself or give as gifts! 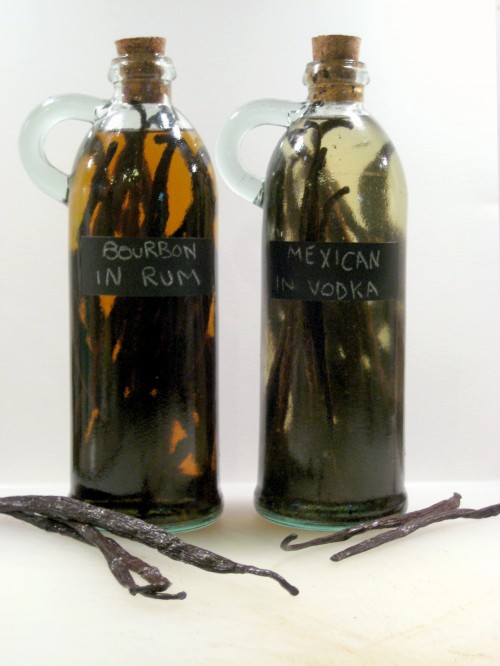 Vanilla extract 12 hours later. Notice how dark it is compared to the original rum or the clear vodka after just a few hours?

Vanilla beans are actually the fruit of an orchid?

Artificial vanillin is often a by-product from the pulp used in papermaking?

Artificial vanillin is just one of the 171 identified aromatic components of real vanilla beans?

A non-plant vanilla flavoring is made from the castor sacs of beavers and can be labeled as a natural flavoring (it is commonly used in food and drinks)?

What the FRACK is going on?!
Whipped (Coconut) Cream: The Perfect Topping