By MuddyFeet on February 27, 2013 in Food, Paleo Lifestyle

I slaved away over the stove last night making some “gelatin squares” – kind of like Jello Jigglers, but without the brand name, the artificial colors and flavors.  I used Knox gelatin and some organic apple cider that the kids love.  The directions are on the box of gelatin, but it is as easy as bringing 3 cups of juice to a boil, sprinkling the gelatin (4 packs) over a cup of cold juice, letting stand for a minute,  adding the hot juice in, stirring and cooling (in a 9 x 13 inch dish) in the fridge for a few hours.  While the apple cider was heating, the aroma inspired me to sprinkle in a bit of cinnamon too.  I momentarily spaced the fact that the cinnamon just floats around on the surface, and we ended up with cinnamon clumped a bit on the outside edges of the pan.  Had I stayed awake longer and stirred the gelatin as it cooled, that cinnamon would have surely been perfectly suspended throughout the squares. 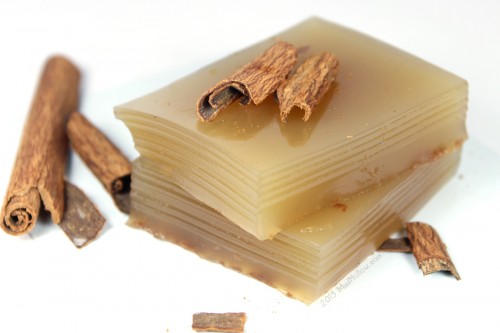 Upon being served some for breakfast (who doesn’t like fruit gelatin for breakfast?), my eldest son responded “It looks like it needs some Whipped Coconut Cream, can I add it?”  He was NOT allowed to add it (primarily because I didn’t have any ready to go), but he enjoyed the gelatin nonetheless.  He did say that he would prefer a stronger apple flavor, so we may try making some using homemade applesauce in place of some of the juice next time.  His idea of adding whipped cream, and a conversation with him the other day about orange cream soda, made me think we should try creating an orange cream gelatin.  I am picturing mandarin orange slices (fresh not canned) added in – yum!